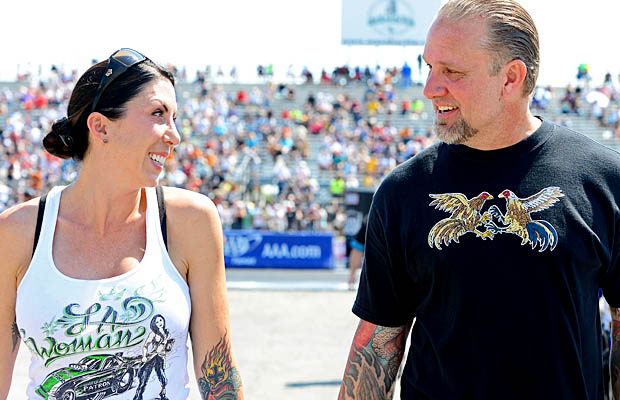 The internet is abuzz about reality show, bike building celebrity Jesse James and 36 year old, Alexis DeJoria who rumors say were married over the weekend in Malibu California.

Jesse hasn’t officially confirmed the rumors, and his manager isn’t responding to the press inquiries, but OMG is reporting the pair were hitched on the estate of the bride’s father, John Paul DeJoria, the Paul Mitchell hair care products billionaire businessman.

Reportedly Jesse asked DeJoria to marry him this past November after dating for two months.  He’d previously proposed to Kat Von D after 5 months of courtship.  Von D split from James in September 2011 after she claims he cheated on her with as many as 19 women.

DeJoria is a rookie in the professional ranks of the National Hot Rod Circuit and met James in Ennis Texas in September 2012 when he sponsored a mutual friend’s team.

James and DeJoria, who drives the Patron Nitro Funny Car on the drag race circuit, reside with their combined brood in Austin, Texas, where he recently relaunched West Coast Choppers after a four year hiatus.

You have to give it to Jesse, he never gives up.

The post The Bad Boy of Bike Building Makes it Number Four appeared first on USRiderNews.